Posted on March 8, 2013 by Professional Supplement Center | Leave a comment 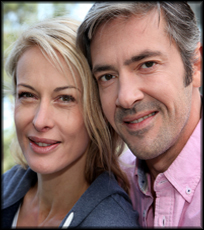 ALS affects the nerve cells in the brain and spinal cord that control movement. Over time these nerve cells die, leading to an inability of the brain to initiate and control muscle movement. Eventually, the disease may lead to total paralysis and is nearly always fatal. ALS usually doesn’t affect intelligence, and people with advanced ALS can still control their eye movements as well as bladder and bowel function.

Several studies have suggested that oxidative stress—damage caused by unstable compounds called free radicals—contributes to ALS. Some studies have shown that high-dose vitamin C, a powerful antioxidant, can slow the progression of ALS in animals with the hereditary form of the disease.

According to the study published in Annals of Neurology, to see what effect antioxidant carotenoids and vitamin C had on the risk of developing ALS, researchers pooled the results of five different studies including the National Institutes of Health–AARP Diet and Health Study, the Cancer Prevention Study II-Nutrition Cohort, the Multiethnic Cohort, the Health Professionals Follow-up Study, and the Nurses’ Health Study. Information from more than one million people was included in the study. Of these, 1,153 people died from ALS.

“ALS is a devastating degenerative disease that generally develops between the ages of 40 and 70, and affects more men than women,” said senior study author Dr. Alberto Ascherio, Professor of Epidemiology and Nutrition at Harvard School of Public Health in Boston. “Understanding the impact of food consumption on ALS development is important. Our study is one of the largest to date to examine the role of dietary antioxidants in preventing ALS.”

Get Your Carotenoids Here

“Our findings suggest that consuming carotenoid-rich foods may help prevent or delay the onset of ALS,” concluded Dr. Ascherio. “Further food-based analyses are needed to examine the impact of dietary nutrients on ALS.”

Here are 2 supplements we offer that contain lutein and beta-carotene Lutein/Zeaxanthin By Pure Encapsulations & Beta Carotene By Vital Nutrients: 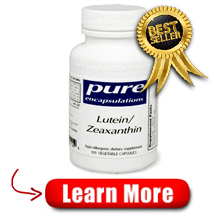 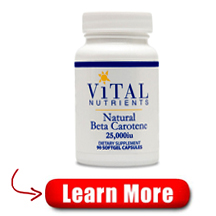