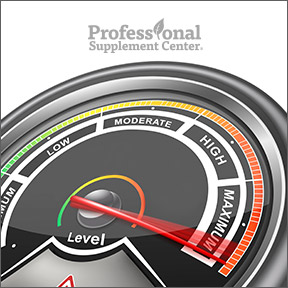 Naturally occurring glutathione, considered to be the body’s most powerful antioxidant, is found within all bodily cells. With additional vital roles as an immune booster and a detoxifying agent, this hard working and incredibly beneficial molecule is the only intracellular antioxidant in prime position to help maintain cellular health and performance, as well as provide protection from oxidative stress by neutralizing the free radicals that can cause DNA cell damage. Produced in the liver from three amino acids, glutamic acid, L-cysteine and L-glycine, healthy levels of glutathione reduce the risks of developing age-related diseases. Additionally, glutathione acts to control the inflammation behind the development of chronic diseases, and aids in the elimination of toxins, pollutants and heavy metals.

Extremely important to maintaining cellular health, evidence shows that the chronically ill, heart attack victims, and patients hospitalized with serious diseases are often found to be deficient in glutathione. Low levels of glutathione leave the cells more vulnerable to cellular DNA damage that contributes to the development of cancer, neurological diseases, and other age-related illnesses. Aging, stress, poor diet, injury, and illness all contribute to low cellular levels of glutathione. However, you can help to protect the body from oxidation by supporting the production of glutathione, as glutathione is both produced and recycled within the body.

Increasing the blood levels of glutathione supports immune function, optimizes detoxification, reduces free radicals and enhances heavy metal clearance. As a master antioxidant, glutathione recycles other antioxidants, such as oxidized lipoic acid, and vitamins C and E, and restores them to an active state after they have depleted their electrons neutralizing free radicals. The most effective way to increase glutathione levels is by eating glutathione boosting foods, exercising regularly and supplementing with glutathione and its precursors, the molecules necessary to support glutathione production.

Sufficient levels of glutathione won’t actually make you look younger, but will help to keep you healthier longer. According to Dr. Mark Hyman, practicing functional medicine physician, “A high level of glutathione is critical to recovery from nearly all chronic illness, to preventing disease and to maintaining optimal health and performance.” By exercising, consuming a nutrient dense diet, and supplementing, you can optimize your overall health and wellness goals along with your naturally occurring glutathione levels:

S-Acetyl Glutathione Synergy by Designs for Health – This formula provides a unique acetylated form of glutathione for optimum absorption and bioavailability. Additional ingredients include vitamin B6 and NAC. Gluten free, Non-GMO vegetarian formulation.

Homocysteine Factors by Pure Encapsulations – This formula provides activated B6, folate as Metafolin®, B12 as methylcobalamin, and anhydrous betaine in support of healthy homocysteine metabolism and glutathione production. Gluten and soy free, Non-GMO vegetarian formulation.

References:
The importance and regulation of hepatic glutathione. http://www.ncbi.nlm.nih.gov/pmc/articles/PMC25960
The Key Benefits of Glutathione. http://aminoacidstudies.org/l-glutathione/
What Glutathione (GSH) is and how it affects your immune health. http://www.immunehealthscience.com/glutathione.html
Glutathione: The Mother of All Antioxidants. http://www.huffingtonpost.com/dr-mark-hyman/glutathione-the-mother-of_b_530494.html
What is Glutathione and How Do I Get More of It? http://drhyman.com/blog/2010/05/12/what-is-glutathione-and-how-do-i-get-more-of-it/
Methylation Problems Lead to 100s of Diseases. http://suzycohen.com/articles/methylation-problems/
How Does Liposomal Glutathione Work? http://glutathione.wellwise.org/how-do-liposomes-work