Migraine – More Than Just A Headache

Posted on March 21, 2013 by Professional Supplement Center | Leave a comment 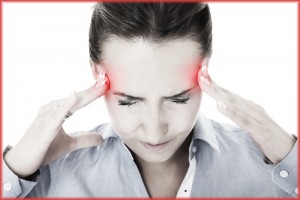 Tension or stress headaches, with common symptoms of dull pressure, discomfort or tightness on both sides of the head, are generally of short duration and severity.  Symptoms of this type of headache can usually  be relieved by rest or over the counter medications.  In contrast, migraines are intense, debilitating, often one sided headaches frequently accompanied by symptoms of nausea and extreme sensitivity to light and sound.

A migraine is a chronic neurological disorder involving the brain and blood vessels that surround the brain.  Research shows that migraines arise from abnormally excitable neurons in the brain and their interaction with the trigeminal nerve, a major pain pathway, that begins in the brainstem.   Messages sent through these nerves bring about dilation of the blood vessels and activate an abnormal release of brain chemicals, resulting in inflammation and the throbbing pain that so many experience.

Migraines rank in the top 20 of the world’s most disabling medical illnesses.  In the United States, this extraordinarily common disease affects 36 million men, women and children.  For many migraine sufferers, this chronic disease significantly reduces the ability to function normally whether at home, work, school or social events, while experiencing a migraine.

Migraines often begin in childhood or adolescence and are most common during peak productive years between the ages of 25 and 55.  Migraines are believed to be caused by both genetic and environmental factors.  If one parent is affected, a child has a 40% chance of propensity for migraines.  Fluctuating hormones are also thought to play a role, as migraines affect more women than men and may decrease during pregnancy and after menopause.

Migraines generally last between 4 and 72 hours and may progress through four stages:

Many migraines, especially in children,  go undiagnosed and untreated.  About  10% of school aged children have migraines, and most have their first attack before 12 years of age.   If you suspect that you or your child is suffering from migraines, track the symptoms, severity of attacks and frequency.  Visit your doctor to discuss your options and treatment.

Although everyone’s experience is unique, there are many common triggers that can stimulate the onset of a migraine headache including:

Pain relievers and anti-nausea medications are frequently prescribed to relieve symptoms that have already begun.  Preventative medications, taken regularly, may reduce the frequency and severity of migraines.  Resting and relaxing in a dark, quiet environment often helps at the onset of symptoms.  Identifying and avoiding triggers can aid in prevention. Establishing regular sleep patterns and practicing relaxation techniques may also be of benefit. Combining medication,  lifestyle practices and supplements may be the most effective way to handle migraines.

Supplements that may support migraine prevention include:

Calcium Magnesium by Pure Encapsulations contains minerals that help to regulate and transmit nerve impulses to the brain.  Studies have found that people with migraines can have low levels of magnesium in the brain.

Co-Enzyme Q10 by Douglas Laboratories helps increase blood flow to the brain and has been shown to aid in migraine prevention.

Basic B Complex by Thorne Research contains an optimal balance of the entire B complex that supports blood flow to the brain and normal brain function.  This formula includes riboflavin and niacin, both thought to helpful in migraine prevention.