Posted on August 9, 2019 by Professional Supplement Center | Comments Off on Neurotransmitters – The Great Communicators 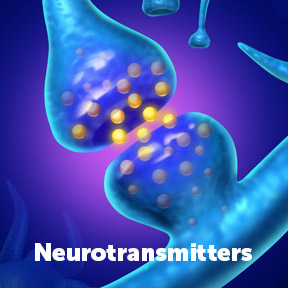 Neurons are specialized nerve cells that receive, process and convey information to other neurons and bodily cells. These information messengers use electrical impulses and chemical signals to transmit, boost and balance information between different areas of the brain, as well as between the brain and the rest of the nervous system. Nerve cells produce enzymes that synthesize most neurotransmitters, signaling chemicals that affect a wide variety of physical and psychological functions. Without the work of neurons and their support cells, the human body could not thrive in homeostasis. In fact, our brains rely on the smooth, fast and efficient release of neurotransmitters to regulate heart rate, sleep, appetite, and mood, as well as enable breathing, learning, reasoning, memorizing, concentration and movement.

Generally neurons do not touch one another and instead communicate by releasing neurotransmitters across a tiny gap, or synapse, transmitting signals that either stimulate (excite) or inhibit (calm) the receiving cells. A neuron can simultaneously receive many impulses, both excitatory and inhibitory from other neurons. Known as summation, a receiving neuron compiles or consolidates multiple signals, firing and calling other neurons into action when more excitatory signals are received. If the sum of the signals is inhibitory, the neuron does not fire and does not influence the activity of other neurons.

Malfunction of these processes has been linked to neurodegenerative diseases such as Alzheimer’s, Huntington’s and Parkinson’s; gastrointestinal disorders, including diverticulitis, irritable bowel, Crohn’s and celiac disease; and disorders such as anxiety, depression, epilepsy and autism. Some of the more well known neurotransmitters are:

GABA: The brain’s main inhibitory chemical messenger, GABA contributes to vision and motor control and plays a major role in reducing neuron excitability and anxiety regulation, as well as relaxation and calmness.

Glutamate: The most plentiful excitatory neurotransmitter found in the nervous system, glutamate plays a role cognition, memory and learning and helps to balance the effects of GABA.

Glycine: The main inhibitory neurotransmitter of the spinal cord, glycine is vital for maintaining healthy central nervous and digestive system functions, as well as the synthesis of nucleic acids. It may also inhibit neurotransmitters linked to seizures and hyperactivity.

Endorphins: Produced naturally by the body, endorphins inhibit the transmission of pain signals and promote pleasurable feelings. Endorphin production can be triggered by physical activities, such as aerobic exercise.

Epinephrine: Better known as adrenaline, epinephrine functions as a neurotransmitter in the brain and as a stress hormone released by the adrenal glands.

Norepinephrine: This neurotransmitter plays a major role in the body’s fight or flight response, boosting alertness and mobilizing the body and brain to act during times of stress, fear or danger.

Histamine: Produced as part of the immune system’s response to pathogens, histamine plays a role in allergic reactions and the inflammatory response.

Dopamine: Dopamine is involved in reward and motivation and plays an important role in body movement coordination.

Adenosine: This brain neuromodulator is involved in cellular energy transfer, signal transduction and the synthesis of RNA. As an inhibitory neurotransmitter, adenosine can act as a central nervous system depressant, promoting sleep and suppressing arousal.

Acetylcholine: Found in both the central and peripheral nervous systems, acetylcholine is the primary neurotransmitter associated with motor neurons and muscle movements. It plays a role in memory, learning and sleep as well.

D-Ribose with Peak ATP® by Progressive Laboratories®: D-ribose is a critically important sugar molecule and essential component of ATP, the source of cellular energy. Peak ATP®, developed through a proprietary fermentation process, delivers the exact molecule the body needs to create energy.