Our Love Affair With Wheat

Posted on July 2, 2014 by Professional Supplement Center | Comments Off on Our Love Affair With Wheat 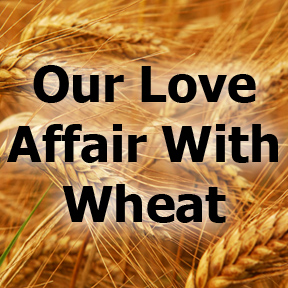 Is there any question that many of us have an on-going love affair with wheat?  We often have wheat-based foods for breakfast, lunch, dinner and between meal snacks.  Wheat, in the form of breads, bagels, cereals, pastas, pizzas, crackers, pretzels, cookies, or cakes, is ubiquitous in the American diet.  Grains have been a worldwide dietary staple almost since the beginning of time.  Our hunter-gatherer ancestors likely foraged for wild grasses and seeds and may have even scattered them near shelters for later harvesting.  Ancient agriculturists, such as the Sumerians, are believed to have cultivated grains dating back to 5000 BCE.  Some of their recipes for breads and pastries containing barley and emmer wheat were left behind on their cuneiform clay tablets.  Bread has been so fundamental to the human diet, we refer to it as the “Staff of Life.”  We “break bread” with our families and friends when we sit down to enjoy a meal.  To describe something new and wonderful, we might say, “It’s the next best thing since sliced bread.”

Now that saturated fats are no longer touted as the dietary heart disease-causing culprits they were made out to be for the last 30 or so years, scientists and nutritionists are beginning to question whether products that contain wheat, even whole grain wheat, are making us obese and contributing to diabetes, heart disease, high blood glucose levels and immuno-reactive problems.  Wait.  What?  Now that we can once again guiltlessly spread butter on our toast, we shouldn’t be eating toast?  As a result of hybridization, wheat produced today would be unrecognizable to farmers of 100 years ago and for centuries prior.  Those 4′ tall “amber waves of grain” have been reduced to dwarf varieties that reach 1-2′ tall and that now account for 99% of all wheat grown worldwide.  Wheat grown today cannot exist without human support and intervention, such as the addition of nitrate fertilizers and pesticides.  Today’s wheat has been produced to be drought tolerant, disease resistant, higher yielding, and profit expanding.  But what is it doing to our bodies?

Some scientists and physicians suggest that the gluten in wheat and other grain products contains novel proteins that are difficult, if not impossible, to properly digest.  This can result in the development of leaky gut syndrome and the accumulation of deep visceral fat around our bellies, laying the groundwork for inflammation and insulin resistance.  Wheat, along with rye, barley and spelt, contains a family of gluten proteins that can create long-term digestive problems and, for the gluten intolerant or gluten sensitive, a host of autoimmune diseases.  As a result of more and more Americans experiencing non-celiac gluten sensitivity, gluten-free foods have exploded in the marketplace.  While this may be very helpful for those with celiac disease, who must avoid any and all gluten, many of these products are just highly processed foods, high in sugar, fat and additives.

While many believe gluten free diets are a cure all for weight loss and chronic health conditions, gluten-free doesn’t necessarily mean healthy.  Going gluten-free doesn’t mean just giving up pizza, beer and your morning toast.  Gluten is found in virtually all processed foods such as frozen dinners, candy, salad dressings, canned foods and condiments.  If going gluten-free means you eat smaller quantities of processed food and foods high in added sugar, and opt for more whole foods, vegetables, proteins, and dairy,  you would be on the right track to a healthier way of eating and might even lose weight in the process.  If you want to cut back on gluten in your diet without completely giving up grains, try naturally gluten-free grains such as wild or brown rice, amaranth or quinoa.

Some feel that since wheat has a been staple in our diets for thousands of years, we should not consider eliminating it from our daily meals.  The key issue here is that wheat has changed.  It is estimated that approximately 18 million Americans now have non-celiac gluten sensitivity.  To self-test for gluten sensitivity, eliminate gluten from your diet for at least 3 – 4 weeks and then reintroduce it.  If you feel significantly better without gluten or feel worse when you reintroduce it, then gluten is likely a problem for you.  If you are experiencing chronic digestive problems, abdominal pain and bloating, unexplained weight loss, headaches, brain fog or fatigue, consider being tested for celiac disease, gluten intolerance or gluten sensitivity.

Gluten Sensitivity Support Kit Program – 30 Day by NuMedica works synergistically with a gluten-free diet.  This kit contains nine formulas that are chosen for their ability to support the repair of damaged tissue, restore and support a healthy and balanced immune system, reduce chronic inflammation and revitalize overall health in gluten sensitive individuals.

GlutenEase™ by Enzymedica assists in normalizing the inflammatory response and proactively supports the gut by allowing proteins to be properly broken down and utilized in their digested state.

Gluten-Flam (K-52) by Apex Energetics is a one-of-a-kind digestive aid that provides powerful gluten digestive enzymes and intestinal support.  Highly rated by our gluten intolerant customers for reducing the effects of gluten exposure.