Posted on March 7, 2014 by Professional Supplement Center | Comments Off on Oxidative Stress Defined 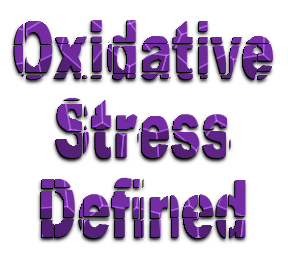 Oxidative stress is the constant burden placed upon cells by the endless production of free radicals.

Essentially, oxidative stress is caused by an imbalance between the production of oxidants (free radicals) and antioxidants, which neutralize the harmful effects of free radicals.  Although free radicals are an essential part of the body’s defenses (immune cells use them to kill invading bacteria), too many can cause normal antioxidant defenses to become overwhelmed.  This can lead to possible cell damage and premature aging, otherwise known as oxidative stress.

How are free radicals formed?

Free radicals are by-products formed as a normal part of respiration as our bodies react with oxygen and our cells produce energy.  Free radicals are also created by the immune system to aid in fighting pathogens, viruses and bacteria.  Environmental factors such as pollution, smoking, sun overexposure and pesticides can also create free radicals.  Too many free radicals cause cell damage.  Too few can result in reduced cell repair and immunity.  Good health depends upon a good balance between free radicals and antioxidants.

How do free radicals cause damage?

Free radicals are unstable oxygen-containing molecules with one or more unpaired electrons.  In order to become stabilized, free radicals strip electrons from cell components such as DNA, proteins or lipids.  This leaves the cell components destabilized and they in turn steal electrons from other molecules, triggering a domino effect that has the potential to cause serious damage to the cells.  Vital organs such as the heart, brain and lungs are vulnerable to oxidative injury because of their high oxygen content and high metabolic rate.

What damage results from oxidative stress?

Oxidative stress can lead to many serious health conditions including neurodegenerative diseases such as Parkinson’s and Alzheimer’s, chronic fatigue syndrome, heart failure, atherosclerosis, hypertension, gene mutations and cancers, diabetes, inflammatory diseases and more.  In diabetes, for example, oxidative stress byproducts contribute to insulin resistance and cause oxidative protein damage, furthering the complications of the disease.  Oxidative stress plays a multistep role in the formation of cancers by causing DNA cell mutation and proliferation.

What role do antioxidants play?

Without becoming destabilized themselves, antioxidants have the ability to stabilize free radicals by donating electrons.  Donating an electron to a free radical terminates the chain reaction before vital molecules are damaged.  There are several enzyme systems in the body that neutralize and contain free radicals.  The body’s principle antioxidants are vitamins E and C and beta carotene.  As scavengers, they help prevent cellular and tissue damage that could lead to age related diseases.

How do we get enough antioxidants for optimal health?

Research shows that approximately 50% of Americans don’t eat enough antioxidant-rich fruits and vegetables, leaving them devoid of the nutrients and antioxidants necessary for long term health.  Adding at least five servings of a variety of colorful fruits and vegetables each day is a good first step.  Free radicals come in different shapes, sizes and chemical formations, so a variety of antioxidant-rich foods is key to building an army of free radical fighters crucial for healthy aging.

For the 50% of Americans who don’t eat their fruits and veggies, or those who smoke or have highly stressful lifestyles or health challenges, antioxidant supplementation can ensure that the body is getting the disease fighting nutrients necessary for optimal health.  Even those who follow a generally healthy diet could likely benefit from taking a multivitamin and mineral supplement each day for added nutrient and antioxidant insurance.