Reversing The Role Of Saturated Fat In The American Diet

Posted on December 11, 2013 by Professional Supplement Center | Comments Off on Reversing The Role Of Saturated Fat In The American Diet 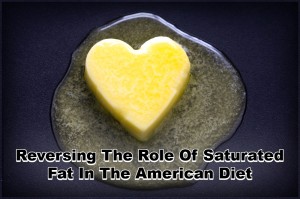 Now that the FDA has finally decided to ban trans-fats from processed foods and, in turn, from the American diet, when will they conclude that the war on saturated fats was a huge nutritional mistake?

Recommended since 1977,  the low fat diet, along with the rise of processed vegetable oils and significant amounts of added unnatural sugars, has greatly contributed to the current health epidemics in the United States, including  heart disease, obesity, metabolic syndrome, and type 2 diabetes.  Studies are clear that European, Mediterranean and Nordic countries whose citizens consume the highest levels of saturated fats have the lowest rates of heart disease and consequently the lowest risks of dying from cardiovascular disease.

In an article recently published in The British Medical Journal, British cardiologist Aseem Malhotra states, “It is time to bust the myth of the role of saturated fat in heart disease and wind back the harms of dietary advice that has contributed to obesity.”  Additionally, Malhotra concludes that despite the public health message that made all sources of saturated fats verboten and a generation of patients taking statin medications to reduce cholesterol, we have not only failed to reduce heart disease but have greatly increased cardiovascular risk.  It appears Dr. Atkins, who advocated for a lower-carb, higher-fat diet, may actually have been onto something.

Can bacon and butter lovers rejoice?  Well, not exactly.  Although saturated fats are not the demons they have been made out to be, they still contain calories and it’s essential to consume a balance of carbohydrates, largely from fruits and vegetables, protein and healthy fats.  Added sugars are now being seen as the major contributors to metabolic syndrome, which includes a cluster of health risks, including hypertension, high fasting blood sugar, abdominal obesity, high triglycerides and low HDL cholesterol.  A UCLA study showed that 75% of patients admitted to the hospital with myocardial infarction (heart attack) did not have high total cholesterol.  What they did have was an extraordinarily high 66% rate of metabolic syndrome.

Saturated fats got a bad rap when they were combined with added sugars in low-fat processed foods during the second half of the 20th century, in which we saw the steep rise in chronic illnesses.  Although the American Heart Association has yet to come aboard with the latest studies on saturated fats, they do recommend significantly limiting added sugar consumption.  All the data supports the fact that when natural foods containing saturated fats were reduced in the diet, disease rates went up, not down.  Margarine, for example, which is low in saturated fat but high in toxic man-made trans-fats, was recommended as a replacement for real butter.  The truth is that since butter was replaced with processed vegetable oils and trans-fats, coronary heart disease has skyrocketed.  The fact remains that traditional foods like meat and butter have sustained human health for thousands of years.  So, it doesn’t really make sense to blame new disease epidemics on these foods.  Real foods contain saturated fats and real foods support wellness not illness.  Pass the butter, please!

Did you know that the following foods contain healthy fats?

Organic milk – In a  scientific study that compared the fat content of 400 brands of whole milk, organic milk from pasture grazed cows consistently contained the highest levels of polyunsaturated fatty acids.  In fact, organic milk had twice as much heart healthy omega-3’s as compared with commercially produced milk.

Avocado – Approximately half of the total fat contained in an avocado is oleic acid, which is  similar to the fat composition of olives and olive oil.  Avocados contain phytosterols, which are key supporters of our inflammatory system and help to keep inflammation under control.  The well documented health benefits of avocados have been shown to lower the risk of heart disease precisely as a result of their unusual fat composition.

Nuts – The health benefits of nuts, which contain nearly 80% fat, have been reported most recently in The New England Journal of Medicine.  Nuts contain heart protective omega-3 fatty acids that help to lower triglycerides, prevent abnormal heart rhythms and slow the rate of plaque buildup in the arteries.  The monounsaturated fats found in nuts support healthy levels of protective HLD cholesterol and do not contribute to higher levels of LDL cholesterol.  The study concluded that people who ate nuts every day are 20% less likely to die from heart disease, cancer or any other health related cause than those who did not include nuts in their diets.