The Interplay of Exercise and Music 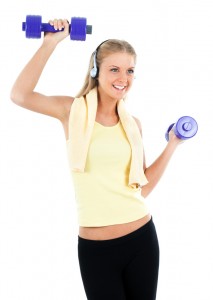 “One good thing about music, when it hits you, you feel no pain.”
~ Bob Marley

Music has the power to stir our emotions, affect our mood, aid concentration and reduce stress.  Music when added to an occasion such as a wedding or party increases the enjoyment of the event.  It appears that adding music to your exercise routine can help boost endurance during exercise as well as increase the enjoyment of your workout.  For many people, music is essential to peak performance and a satisfying workout.  Exercising to music can create an increased sense of motivation along with the goal of an increased heart rate.  If you listen to music while exercising, the tempo of your music may have a measurable effect on how vigorously you exercise.

According to Costas Karageorghis, a sports psychologist at Brunel University in Britain, there are four factors that contribute to a song’s motivational qualities: rhythm response, musicality, cultural impact and association.  Rhythm response relates to beats per minute of the song and how well it matches the heartbeat of the exerciser.  Studies show that an athlete’s performance and attitude are affected by the tempo of the music listened to during a workout.  Heart rates, it appears, rise and fall with the pace of the music.  When the tempo picks up, so does the motivation and effort  required to complete the exercise.  While athletes reported being aware of the increased exertion, they also reported being stimulated by it.  Music can help increase endurance by as much as 15%, helping to lower the perception of effort during exercise and increasing energy efficiency as well.

Researchers theorize that the body instinctively tries to match the rhythm of the music.  Listening to music and exercising both stimulate similar nerve activity in the brainstem that involves communication between the brain and other parts of the body, including muscles and the cardiovascular system.  Studies show a causal relationship between music and our reward system, a core part of the brain that reacts to beneficial stimuli, such as exercising, and then reinforces these behaviors resulting in motivation to do more.  The release of dopamine, the feel good brain chemical, is linked with the feeling of pleasure induced by music.

When choosing a song list for a workout, the type of music matters less than the tempo.  Many of the studies that address the role of tempo in exercise motivation and performance have settled on 125 – 140 beats per minute (BPM) as the ideal range for a workout.  This pace coincides with most commercial dance music and rock songs.  It also roughly corresponds to the average person’s heart beat during a routine workout.  For stroll walkers going at a pace of 3 mph, choose songs of approximately 115 BPM, power walkers with a pace of 4.5 mph, 138 BPM and for runners, 147 – 160 BPM.  To quickly calculate the BPM for a favorite song, go to songbpm.com, and type in the name of the artist and the song title.

While tempo may influence the exercise pace, other musical qualities, such as the beat pattern and complexity of notes, influence the energy level of the movements, including the length of a walking stride.  Taking into consideration the level and intensity of your workout, song choice becomes a personal preference.  Loud, upbeat music generally has a stimulating, energizing effect.  Slower paced music can have a sedative effect, calming and soothing your mental or emotional state.  Both types of music can be incorporated into your playlist and be used to set the pace for warm up, intensity, and cool down.

Music has been credited with curative, therapeutic and other medical value throughout history.  The human brain may have evolved with the expectation that, wherever there is music, there is movement.  For locomotion, humans must overcome two forces, gravity and friction.  “Anything that moves, or anything that flows, must evolve so that it flows more and more easily.  Nature wants to find a smoother path, a path with less resistance,”  states Adrian Bejan, a professor of mechanical engineering at Duke University.  Adding music to your exercise routine may just be the key to a gainful, less resistant workout.

What song tops the list of many playlists as the perfect workout track?  “Gonna Fly Now,” the theme from the movie, “Rocky,” as it evokes a state of optimism and excitement in the listener, and encourages that winning attitude.