The History of Probiotics From Antiquity to Modern Day

Posted on October 17, 2019 by Professional Supplement Center | Comments Off on The History of Probiotics From Antiquity to Modern Day 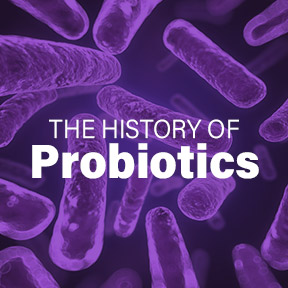 How interesting that the documented therapeutic use of probiotics can be traced all the way back to Pliny the Elder, military commander of the early Roman Empire, naturalist and author of Naturalis Historia (Natural History). Based on fact, opinion, speculation and observation, this work is celebrated as the first scientific encyclopedia, a massive treatise on the natural world that included art, astronomy, anthropology, agriculture, botany, chemistry, geography, horticulture, magic, medicine, mineralogy and zoology. One of the largest single works to have survived from antiquity to the modern day, Naturalis Historia served as the western world’s primary source of scientific information and theory from 77 CE until the middle ages. Somewhere within this 37-volume work, Pliny the Elder endorsed fermented milk beverages as a natural treatment of gastrointestinal disorders.

Per the Journal of Infectious Diseases & Preventive Medicine, fermentation is a metabolic process by which an organism converts a carbohydrate, typically starch or sugar, into an alcohol or acid. These metabolic byproducts lower pH and effectively prevent spoilage of fermented foodstuffs. While no one knows precisely when humans began using the fermentation process, it is generally agreed that this method of food preservation began in antiquity. Artifacts suggest that fermented milk products were consumed as early as 7000 BC. The fermentation process for food preservation also led to the brewing of beer and ale, the fermentation of grapes and other fruits to make wine and the use of yeast to make lighter, more airy bread.

Although ancient civilizations did not attribute the fermentation process to microorganisms, history supports the use of fermented milk products for their taste and health benefits. During the middle ages a wide variety of fermented foods and drinks were consumed to promote digestive health and wellbeing. It took centuries before the scientific connection was made between health and the ingestion of living microorganisms.

Initially, the focus of fermented milk products with probiotics was the treatment of intestinal infections. Interest in probiotics gradually waned in the late 1930’s, largely a result of the Great Depression, World War II and the discovery of antibiotics. Since the 1980’s, increasing antimicrobial resistance, limited pharmaceutical research and the development of infectious diseases has led to increased interest in probiotics, viewed as an advantageous non-pharmaceutical strategy to prevent and potentially treat a variety of infections. The 1994 passage of the Dietary Supplement Health and Education Act (DSHEA) allowed for the use of probiotics in food substances and dietary supplements. However, the Food and Drug Administration (FDA) guidelines prohibit any therapeutic claims of probiotic strains without undergoing pharmaceutical regulatory processes.

From probiotic origins as home-brewed fermented milk to our present day commercially available foods and supplements, historical perspectives and contemporary research appear to support the gut microbiota’s positive effect on health and disease prevention. We know that beneficial bacteria have wide-reaching effects and are a necessary part of health regulation. We also know that consumers want and are entitled to accurately labeled, safe and efficacious probiotic products. Although the ideal ratio of probiotics and composition has yet to be determined, the basic premise of probiotic use is to restore a relative population of healthy beneficial bacteria to effectively support digestive, immune and optimal health.

Professional Supplement Center offers these and other scientifically-based professional probiotic formulations in support of overall health:

Bifido Complex by Progressive Laboratories™: Each capsule of this science-based, pre- and probiotic nutraceutical provides a proprietary blend of one billion live organisms from specially selected strains proven to be acid and bile resistant to allow delivery to the intestinal tract for maximum benefit. Free of wheat, corn, soy, milk, whey and preservatives. Refrigeration required.

This entry was posted in Home. Bookmark the permalink.