The Impact of Environmental Mold on Your Good Health

Posted on November 2, 2017 by Professional Supplement Center | Comments Off on The Impact of Environmental Mold on Your Good Health 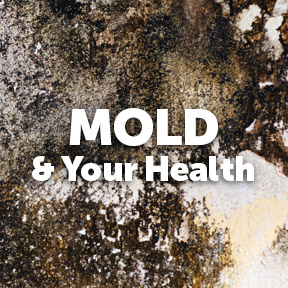 Mold. Just the thought of it makes people cringe. Yet, molds grow naturally in the environment and are necessary for the breakdown of organic plant and animal matter. Mold is actually a type of fungus that is neither plant nor animal, nor a type of bacteria. Fungi, which occupies a kingdom of their own as a separate types of living organisms, includes not only molds, but also yeast, mushrooms, lichen and truffles. Molds are responsible for medications such as penicillin and cyclosporine, as well as foods such as tempeh and blue cheese. Without yeast we would have no leavened bread or wine or beer. While some of these organisms offer benefits, others wreak havoc on the ecosystem and human health. Fungi is known to cause illness and diseases linked to allergies, respiratory problems and skin infections.

Mold pollution is a key element of indoor air pollution. Long-term exposure to indoor molds is unhealthy for everyone, as indoor molds can produce extremely potent lipid-soluble mycotoxins that are readily absorbed by the skin, airways and intestinal lining. While the type and severity of health effects varies widely from person to person, those with respiratory conditions, allergies, asthma, and compromised immune systems, as well as the young and the elderly are more likely to develop severe symptoms. Molds grow and reproduce by releasing spores into the air, and can grow on virtually any surface when moisture and oxygen are present. Mold grows in obvious places, such as damp basements and shower stalls, and can also grow in damp areas behind wallpaper or drywall, under carpet, ceiling tiles, sinks or appliances, on wood, around plumbing, and anywhere humidity levels are high. Mold spores can enter a home or building through open doors, windows or vents and can be carried indoors on shoes, clothing and pets.

As mold is virtually everywhere, we are constantly exposed to airborne microscopic spores. Health problems that can occur from mold exposure include allergic illness, irritant effects, infection, and toxic effects. Per the CDC, in 2004 the Institute of Medicine (IOM) found sufficient evidence to link indoor mold exposure to general upper respiratory tract symptoms, coughs, and wheezing in otherwise healthy persons. Other studies suggest potential early mold exposure is linked to the development of asthma in children, particularly those genetically susceptible to asthma development. While the effects of mold on health continue to be studied, a 2003 environmental medicine symposium in Dallas presented results of a study of 1,600 individuals suffering health issues related to fungal exposure. Patients experienced medical problems including muscle and joint pain, headache, anxiety, depression, fatigue, gastrointestinal problems, and memory, immune, and visual disturbances.

Mycotoxins are secondary metabolites produced by microfungi that are capable of causing disease. Though difficult to classify due to their diverse chemical structures and biosynthetic origins, they are typically categorized by the organs they effect, such as hepatotoxins, nephrotoxins, neurotoxins, and immunotoxins. Cell biologists group them as mutagens, carcinogens, allergens and teratogens. Per the National Institutes of Health (NIH), many occupants of modern, sealed, airconditioned buildings, especially water-damaged ones, have reported adverse health effects. Exposure to fungi in home and work environments is an increasing area of concern. Although much more research is needed, there is sufficient evidence from human and animal epidemiological data to conclude that mycotoxins pose an important danger to human health.

Exposure to mycotoxins occurs more frequently in areas with a hot and humid climate favorable to the growth of molds, but they can also be found in temperate zones. Per the World Health Organization, (WHO), mycotoxicosis, the effects of mycotoxins on human and animal health, often remains unrecognized by medical professionals, except when large number of people are involved. Currently, there are no accepted standards for environmental molds in indoor environments or for analyzing and interpreting data regarding their effects on human health. However, the IOM identified damp indoor spaces as a public health problem that needs to be addressed, and highly recommended that any type of mold present in homes or buildings be quickly remediated.

Professional Supplement Center carries these and other high quality products to support detoxification and overall wellness:

S-Acetyl Glutathione Synergy by Designs for Health®: Comprised of three amino acids, glutathione is the single most powerful antioxidant produced and recycled by the body. It’s made in the liver, the organ most responsible for detoxification. As natural production decreases with aging, boosting glutathione levels allows the body to detoxify, protects DNA from damage, and helps maintain optimal immunity. Gluten free, Non-GMO vegetarian formulation.

Mold Mix #1 by Dynamic Nutritional Associates: This homeopathic antigen medicine is specifically formulated to address allergic reactions resulting from exposure to toxic metabolites. The formula provides a blend of homeopathic dilutions to neutralize the body’s response to, as well as moderate the symptoms caused by this type of allergen.

MycoCan-Chord by Energetix: This homeopathic combination formula addresses symptoms associated with candida and exposure to mold or fungus, as well as the symptoms of imbalanced terrain in which mold, fungi and candida thrive. Gluten free formulation.

Toxic Fungi-Mold Nosode by Professional Complementary Health Formulas: This professional homeopathic nosode formulation supports improved resistance to and recovery from toxic fungi and mold exposure. Used throughout homeopathy’s history, nosodes may assist the body in recognizing a disease-causing entity and may stimulate a level of natural protection that aids in the elimination of the pathogen or susceptibility towards symptoms. Gluten and soy free, vegetarian formulation.

This entry was posted in Home and tagged Mold Mix #1 by Dynamic Nutritional Associates, MycoCan-Chord by Energetix, Purify Coconut Charcoal + by Enzymedica, S-Acetyl Glutathione Synergy by Designs for Health, The Impact of Environmental Mold on Your Good Health, Toxic Fungi-Mold Nosode by Professional Complementary Health Formulas. Bookmark the permalink.