Posted on January 25, 2013 by Professional Supplement Center | Leave a comment 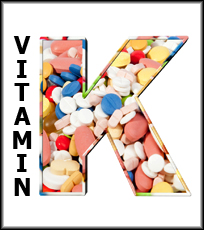 Bones mineralized with calcium are generally strong and healthy, but calcium doesn’t get into the bones on its own. Calcium’s helpers include vitamin D, which is needed for dietary calcium absorption, and vitamin K, which keeps bone proteins able to bind to calcium. A study looking at the effect of vitamin K supplements on bone health found that taking either vitamin K1 or vitamin K2 increased the effectiveness of calcium plus vitamin D in postme nopausal women.

Vitamin K1, known as phylloquinone, is made by most plants and is found in high amounts in green leafy vegetables. Vitamin K2, a form of vitamin K found in meat, cheese, and some other foods, is actually a group of fat-soluble vitamins known as menaquinones.

The study, published in Calcified Tissue International, included 173 healthy postmenopausal women who were divided into four groups: a calcium-plus-D group, a K1 group, a K2 group, and a control group. Everyone except the control group received diet and lifestyle counseling, as well as fortified milk and yogurt products providing 800 mg of calcium and 400 IU (10 mcg) of vitamin D per day. The fortified dairy foods given to the K1 group also included 100 mcg of vitamin K1 per day, and those given to the K2 group had 100 mcg of vitamin K2. The control group ate their usual diet throughout the study.

After one year, there were several significant differences between the groups:

The results of this study suggest that vitamin K, whether as K1 or K2, may add to the beneficial effects of a comprehensive bone health program. The study’s authors explain, “The holistic nature of the current intervention and probably the synergistic effect of supplementing nutrients that are essential for bone health . . . together with increasing physical activity levels and improving dietary patterns as a result of counseling sessions could probably provide an explanation for these favorable changes.”

While vitamin K may play a role in maintaining bone density as we age, these results don’t tell us for sure whether vitamin K supplements can contribute to fracture prevention. Here are some other strategies that have been shown to prevent bone fractures:

Finally, if you take a blood thinning medication and you’re considering adding a bone-building supplement that includes vitamin K, be sure to talk to your doctor before you start.